Asking for help can be hard but it’s worth it

Resa and Tavai are new parents to three-month-old Resa. They have been living with Tavai’s parents over the past three months through lockdown. With the support of Tavai’s parents, they are learning the ins and outs of their new roles with baby.

Living as new parents with your partner’s parents can be a blessing, just ask Resa Ahvui Shu-peng. Resa and her partner Tavai are still getting acquainted with their young daughter Resa, who was born in August, one week before the country went into Level 4 lockdown. “I was at home with a baby and had no clue what I was doing so going into lockdown added pressure because I couldn’t go to visit my family,” says Resa.

The new parents decided to stay where they were in Mangere with Tavai’s parents. Resa lost her own mother when she was 18.  “I was just entering adulthood and didn’t think then to ask her any questions about motherhood so when I fell pregnant I didn’t know who I would turn to.”  Although she had the support of Tavai’s mother, Pua, Resa didn’t feel comfortable asking her mother-in-law for help as it didn’t feel the same as it would have asking her own mum. “I struggle not having my mum around as she would’ve been my main support.”

Pua was already a grandmother to three grandchildren and says it is now her turn to show and teach her two sons how to raise their children.  Her love for her son and his family is unwavering.  “I support them anytime, anywhere. Especially Resa for her firstborn. I like to help her in the daytime by caring for the baby for a couple of hours so she can have a break,” says Pua.

Resa says Pua’s constant, unobtrusive support has been a big help. “She wakes up first thing in the morning to have a shower and breakfast. When she’s ready I hand baby over to her so I can have my shower and get ready.  “She has so much time and patience even if Resa is crying constantly to calm her down. She’s not pushy on how to mother a child. She lets us do what we have to do and if she sees something that’s not right, she will give us her input. Which is good because I don’t have a guide to go off,” says Resa. Resa says she’s still learning to feel more comfortable asking for help. “In time I think I’ll be able to ask her for more help. It’s still early days,” says Resa.

Safe sleep takes pressure off everyone

The fanau is also aware that the safest place for baby Resa to sleep is in her own cot.  “We make sure everything beside her and around her is clear so she can sleep freely in a safe cot,” says Pua.

Having read articles about babies that die in their sleep because they weren’t sleeping in their own bed, Tavai and Resa decided to get a side sleeper before Resa was born. “Knowing she is in her own bed takes some pressure off us,” says Tavai. He says he is still getting used to the lack of sleep and appreciates the support they receive from his mum.  “The tips and advice she offers for things we didn’t know as parents, it actually works.  “If Resa or I are feeling tired, Mum will take baby so we can have a one or two hour nap and be good to go again.” 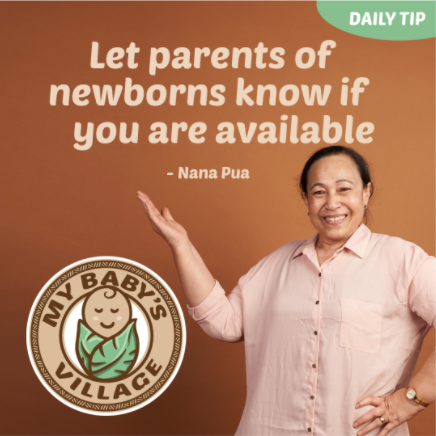 Parenthood is all worth it

Tavai works full-time, waking up early most days to head to work. “It’s easier to wake up now as a parent, knowing I have to provide for my family,” he says.

Resa says being a parent is an amazing feeling. “Some people might feel a lot of pressure because there’s someone who depends on you all the time but I feel like it’s the best feeling,” says Resa.

“I enjoy waking up in the morning and she’s the first person I see and, regardless of how bad the day before was, I see that face and it’s all worth it.”